How can we help you today?

How do I type Japanese on my Windows PC or Mac? Print

Whether your intention is to input romaji, kana, or kanji, you will have to type phonetically using the QWERTY keyboard on your Mac or Windows computer. This means that you have to learn what combinations of letters on your keyboard correspond to which syllables in Japanese writing. To toggle between romaji and kana input, you simply hit the Windows Button + Space on Windows or Ctrl + Space on Mac.

Romaji refers to the romanization of written Japanese. “Sushi” and “karate” are common examples of Japanese loanwords that have been introduced to English. “Sushi” and “karate” are the romaji spellings of these words. Of course, Japanese folks don’t usually write “sushi” or “karate” with the alphabet like this --- they write 寿司 (すし) and 空手 (からて)! The bold word is written in kanji (or Chinese characters) and in the parentheses is the kana for the words. Kana indicate how the character is pronounced, and are kind of like an alphabet but indicate syllables instead of individual letters.

There are multiple accepted romanization systems in Japanese. The word for “Tokyo” (とうきょう), which has two elongated vowels, can be written Toukyou, Tōkyō or Tôkyô. However, when typing in romaji for FluentU quizzes, we will only accept the “Toukyou” spelling. Elongated vowels must be spelled like their corresponding kana. For example, おおかみ (wolf) must be spelled ookami, not okami.

For more detailed information on systems of romanization in Japanese, please check out this Wikipedia article. You can use this chart to guide you in typing Japanese phonetically.

To type in kana, simply toggle the keyboard until the あ symbol appears. As you can see in this chart, there are a few ways to produce certain kana in Japanese. For example, if you want to type ふ, you can type either “fu” or “hu” to produce the kana. It’s important to note that the input methods written in red in this chart are acceptable ways to type letters to input kana but will NOT be accepted in FluentU quizzes if you are typing in romaji. For example, when you are using your QWERTY keyboard to produce kana and write the word すし (“sushi”), you are able to input either “susi” or “sushi” and it will produce the hiragana すし. However, if you type “susi” instead of “sushi” when typing in romaji,  your response will be marked incorrect in the quiz.

Some key input tricks to note include:

When you type a word out in kana, the word will be underlined. This underline goes away if you hit the Enter key. However, this underline is important if you would like to input the kanji for a word. For example, if you type the kana す and し, they will look like すし when you’ve finished typing them. 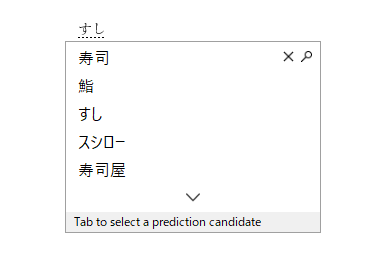 To select the kanji for a group of syllables, you hit the spacebar while they are underlined and cycle through a list of options for kanji, kanji and kana combinations, katakana, or emojis on a drop-down menu that appears. Keep clicking space until you find the one that you want to use. 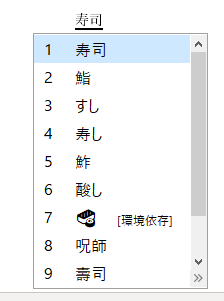 You can keep the underline going for longer segments of text such as きょうはいいおてんきですね and, if it’s a commonly input grouping of words, it will likely guess the correct kanji for everything when you hit space --- 今日はいいお天気ですね。 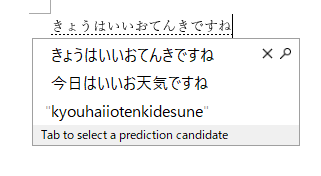 However, if you’re a beginner to typing in Japanese, we recommend starting with selecting kanji for one word at a time.

Did you find it helpful? Yes No

Send feedback
Sorry we couldn't be helpful. Help us improve this article with your feedback.